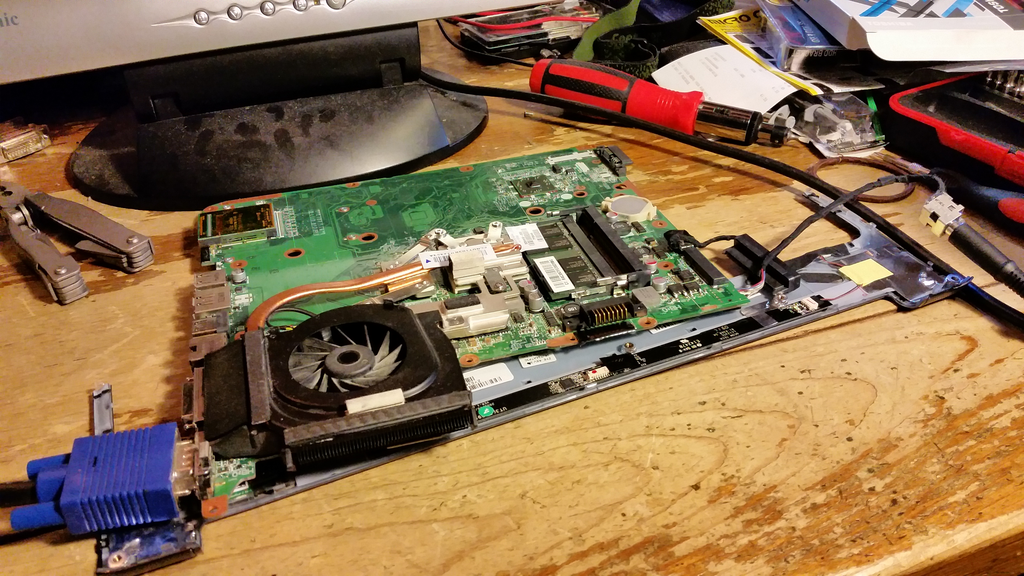 I had first started to try to repair the laptop by doing simple things like removing the CMOS battery, and reseating the RAM. But after those things hadn't worked, this is when I replaced the CPU.

Unfortunately the replacement CPU didn't seem to change a thing, same error blink pattern on startup. So I researched other common ways to temporarily fix old laptops, hoping that learning something today would save me some trouble in the future when my new favorite laptop bites the dust.

One new method I tried was reheating the motherboard in order to reflow the solder in places where there might be a small crack. Many articles state that the easiest way to do this is to literally bake it in the oven. However I did not want to leave any chemical residue in my oven, so instead I used a heat-gun to heat up the motherboard. Taking some advice on common problems with HP laptops, I concentrated on the GPU.

Reflowing didn't fix the problem either, so next I tried removing as many components as possible and booting from a minimal setup (shown in pic related).

The last thing I tried (more crazy online advice) was to let the CPU overheat itself (I did this by disconnecting the heatsink and letting it run till it shut itself down).

Even after all this it still wouldn't boot, so until I think of something else to do with this poor machine, it will remain in stasis.